I have such a strange relationship to travelling. I usually spend the entire time being very cautious about every single thing and counting down the days until I am back at home, in my bed, breathing my suburban, South African air where everything and everyone feels familiar. It’s only after I am back home and safely in my bed, that I begin to appreciate everything in hindsight. It’s as though once I have had a safe trip and confirmation that nothing untoward will happen, then I feel like I can go back, live all those days again and really have a good time. Of course, that would mean that life is a dress rehearsal and we all know that it certainly is not. Sometimes I do wish I was a more carefree traveller but I think I’ll just stay the way I am, even if it means staying in my hotel room a little more than exploring. My personality keeps me safe and I like that very much. Plus, America is scary. We know that.

I was so excited to be back in New York again. The first time was when I attended Goalkeepers, held by the Bill and Melinda Gates’ Foundation in September 2018. My second time in New York was just as wonderful. I was there along with all of the lovely women of the Zanele Mbeki Fellowship (ZMF), including our beloved founder Mrs Mbeki, and we were having our third module there. In this module, we were learning about global feminist community by being immersed in the fast-paced world of the United Nations’ 63rd Commission on the Status of Women (UN CSW). I believe it’s the largest gathering of women-related NGOs in the world. Our mission was to attend as many sessions as possible, learn and discuss amongst each other in order to understand grassroots level to world level feminist organisation. 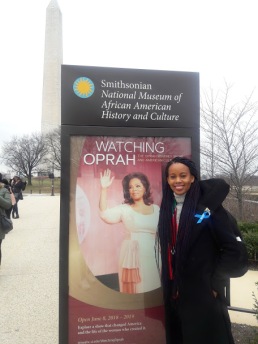 We had such a fun itinerary. One of our first stops was a trip to Washington, for a guided visit of the National Museum of African American Culture and Heritage. The structure and in the interior are all so beautiful and infused with so much meaning. From pre-colonial Africa to contemporary United States, the museum has taken such great care to document the important histories of known and unknown people, the music, documents, art works and esteemed figures who shaped Black people’s liberation. Finding photographs of our beloved Hugh Masekela and Miriam Makeba in the section chronicling music filled me with so much pride because, though exiled under difficult circumstances, these great South African ancestors used their gifts to create indelible trans-national connections. Listen, Hugh was a rock star in the realest sense – please read Still Grazing: The Musical Journey of Hugh Masekela by Hugh Masekela and D. Michael Cheers (2004). Although it’s easy to think of America as being a giant that influences everyone who encounters it, the truth is that Makeba, Masekela and Keorapetse Kgositsile contributed to Black American culture and swag as we know it, by infusing it with their individual, African elements and, in the case of the latter, by literally giving it Hip Hop’s most talented sons. This often-erased fact of mutuality and cultural exchange among all parties matters to me. I am an Anthropologist after all. I also got to see a Kehinde Wiley painting with my own two eyes!

Among the many panel talks and events being hosted during that week, we as the ZMF had the opportunity to host our own. I had been asked by Naledi, our co-ordinator, to contribute to our panel with our guest of honour, Indian feminist economist, Dr Devaki Jain. The panel was about reflecting on the intergenerational connections of feminist thought. It was interesting because we had a women from different parts of the globe speaking, one from Sweden, the US, Zimbabwe, India and South Africa. So, it also became an interesting glance into how people’s various histories and positionalities may have shaped their politics. Definitely one of the most nerve-wracking things I have ever had to do but, worth it.

While I was attending CSW sessions during the day and ZMF debriefs in the evening, I had left my mother in South Africa with an important green folder containing my whole career. The New York Trip overlapped with my MA submission on March 15 so I asked her to please go to school on the 14th to submit on my behalf. New York is 6 hours behind Johannesburg so I stayed up all night making little corrections so that she would wake up with a polished thesis in her email inbox. She went to PostNet to print, bind and download my thesis onto a disc then went to school to do the admin between faculty and fees office and getting my supervisor to sign my paperwork – it was a whole lot and she was flustered but she got it in! I was thrilled! I actually cried when she sent me the receipt of my submission because it took so much to get here: sleepless nights, torrential tears, attacks on my self-esteem, self-doubt, feeling not-smart, making a children’s book to give myself joy and other forms of procrastination.

I had planned well for this occasion though so I had gifted myself with a ticket to Cecile McLorin Salvant at the Jazz @ Lincoln Centre to say “congratulations for completing your Masters, my love!” The last time I was in New York, I hadn’t realised that we would be doing our daily activities at this iconic Jazz venue and failed to make plans to watch any of the shows. It’s so disappointing, but this is exactly what I mean about having to go to a place first for practice so that I can do better next time. So, this time I was blessed because my favourite Jazz vocalist was performing on Thursday night. It was amazing! Cecile honestly has the best vocals and best dresses in the business. What a delight. I even found the video from that exact night: Look! And on Friday night, I joined my fellow fellows for some NY exploring by going to Red Lobster. We had such a great time. I also have to put it on record that Red Lobster by Times Square makes the best Old Fashioneds, ever.

Saturday ended up with a late afternoon, bottomless mimosa brunch at Brooklyn Moon in Brooklyn. Then did the brave thing of taking a train by myself to Harlem because I had gotten myself a ticket to Salon Africana at The Africa Centre, curated by Somi. This month had Thandiswa Mazwai and Nduduzo Makhathini headlining and I obviously was not about to miss out on that so I attended with Musa and Amelia. It was such an incredible night. Soon enough, it was home time so we went back to JFK Airport, where we experienced a 7 hour delay before our 13 hour flight home. Fun, really, because I had all my sisters with me. This time in New York was astounding, overwhelming, enjoyable and so, so unforgettable. So excited to go back again and do even more!

Thank you, Zanele Mbeki Fellowship for the memories!